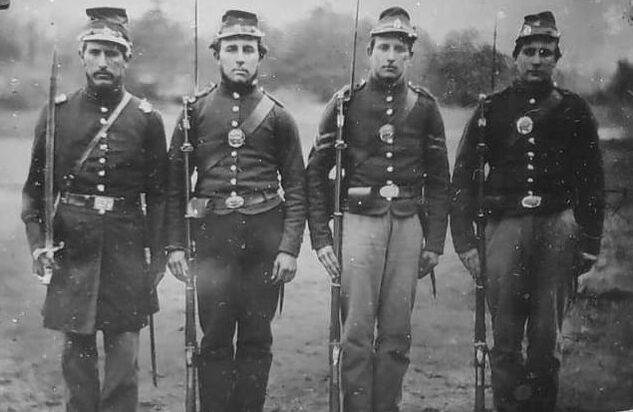 Men of the 46th Illinois Volunteer Infantry Regiment wearing State of Illinois issued uniforms.
When the State of Illinois was thrust into the American Civil War, and Abraham Lincoln sent out his call for volunteers, Illinois men, or "Suckers" began enlisting and organizing regiments that would begin service almost immediately. In the beginning of the war, the state hoped that the Federal Government would be able to outfit and equip its volunteers, however this was not the case.

When the men of the first regiments to be organized began to start their service, none of them were issued uniforms, and the only men in uniforms would have been Officers, and men who had belonged to a pre-war militia company. These pre-war militia companies all wore different styles and types of uniforms, and only comprised a small portion of the State's volunteers. The state immediately began production of its own uniforms, and even began ordering uniforms from other states, such as New York.

For example, the men of the 7th, 8th, and 9th Illinois Volunteer Infantry initially signed on for 90 days service, and due to a lack of uniforms and proper equipment and weapons, when the 90 days was up, many of the men returned home.
The regiments which were organized through the Fall and Winter of 1861 would begin to recieve state issued uniforms that were made in Federal Blue, instead of State Grey. The Illinois troops would spend most of 1861 in Southern Illinois, anticipating a possible Confederate attack, however some regiments began to travel beyond state lines and clash with Confederate Troops.

In February of 1862, many of the early regiments were in their first major engagement, the Battle of Fort Donelson. At Donelson, the Illinois troops took massive casualties, namely in the 9th Illinois Volunteer Infantry. There were several instances when other Federal troops mistook some of the grey-clad Illinois men as Confederates, and fired into them.
Illinois "Sucker State" boys posing for their photos wearing their blue state issued jackets and forage caps.
Immediately following the costly victory at Ft. Donelson, the commanders of the regiments still wearing grey uniforms sent in requests to receive new uniforms from the state. By the Battle of Shiloh, these regiments had all received new blue uniforms. On the morning of the Battle of Shiloh, on April 6th, 1862, the 9th Illinois Volunteers actually mustered out in their new blue uniforms for the first time, before heading into the fray, and again sustaining incredible losses, although this time, their grey uniforms were not to blame. The hard fighting in the ravines to the flank of the Peach Orchard would earn them the moniker, "The Bloody Ninth."

The most common jacket issued to the Sucker State Boys from 1861 - 1863, was dark blue in color, and featured 8 or 9 buttons. It also featured shoulder epaulets, and one or two belt loops. Some variants included a visible chest pocket, and some featured a round bottom, whereas others featured a squared design. These jackets varied in detail from manufacturers, however they were extremely popular among the men, and were often kept in knapsacks and not used for any type of fatigue work.

The State of Illinois still struggled to produce enough uniforms for their Volunteer Regiments, as by November of 1862, the State of Illinois had organized and raised over 130 Regiments to serve the Union. Illinois placed several large orders for uniform jackets from the State of New York, and the New York State Jacket, similar to the Illinois jacket, except featuring sky blue piping, was evident in photographs of men from various Illinois Regiments, to include the 13th and 59th Illinois Volunteer Infantry.

In Frederick Todd’s ‘American Military Equipage’ Vol. 2 states that from April 26, 1861 to July 1862, the State of Illinois purchased:
This quick look into a small period of time, only encompassing a little over a month, the State of Illinois purchased enough coats/jackets and hats/caps to outfit approximately 80 full regiments. And of these items, the predominately most common type of coat issued would have been the state issued jacket as shown above. The most commonly issued headgear, would have been the forage cap, as seen above.
By late Summer, 1862, the Federal Government was finally able to start supplying the Volunteer Regiments. In September 1862 Illinois turned over all its purchased clothing and equipment to the US Quartermaster, which included:
However, even when the Federal Government took over the supply of Illinois troops, Illinois continued to issue clothing to its troops, equipping all its Volunteer Infantry Regiments from the 7th through the 131st with state issued short jackets rather than frock coats, making the most commonly seen coat or jacket by an 'Sucker State Boy' from 62-63, would have been the iconic State Jacket.

By the Fall of 1863, the Illinois Volunteer was practically indistinguishable as an Illinois soldier, as the state issued clothing, to include the iconic State Jacket, was all but worn out, or only used for special occasions. As with the rest of the Federal Army, the Illinois Regiments received the standard issue fatigue blouse and dress coat from that point on. However, due to the popularity of the style of the earlier jackets, many Western Theater soldiers were known to modify their fatigue blouses and even dress coats, to make them appear like the jackets issued to the Boys of 61. 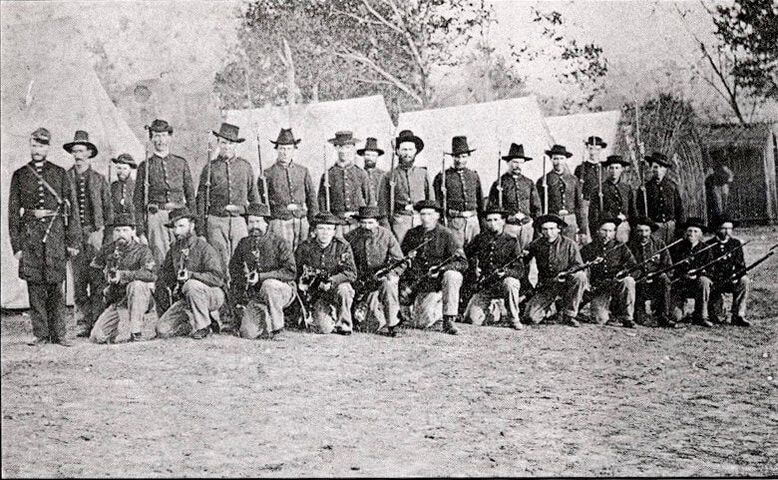 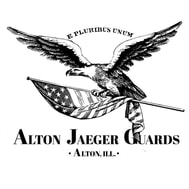