conductors on the Underground Railroad, helping untold numbers of slaves escape bondage for freedom in the North.

Wilbur had nearly completed the Junior year of his college courses at Shurtleff College, when in February 1862, he volunteered to serve the Union and joined the army as Lieutenant, and Aide de Camp. He would eventually be assigned Captain of Company D, 5th Regiment Michigan Volunteer Infantry.

He served at the Battle of Fair Oaks, the Peninsula Campaign and Antietam. He was at Chancellorsville, Gettysburg (where he was wounded), Locust Grove, Mine Run, and many others, having at the time of his death participated in many battles with distinction.

In May of 1864, Captain W. Lovejoy Hurlbut marched with his regiment into The Wilderness, one of the most horrific and brutal battles of the war. It was fought near the old Chancellorsville Battlefield, and spring rains had washed away hastily dug graves, leaving the ghastly sight of dead horses and men everywhere. The dry leaves and the base of the thick forest caught fire during the battle, burning to death, thousands of wounded men still alive.

At The Wilderness he was in command of the entire regiment, due to extensive casualties sustained. Captain Hurlbut’s body was never found. And his family had hoped he had been wounded and captured. His mother, filled with grief, wrote a letter to Clara Barton, begging for her to find her son.
Upper Alton, Illinois Sept. 26th 1865 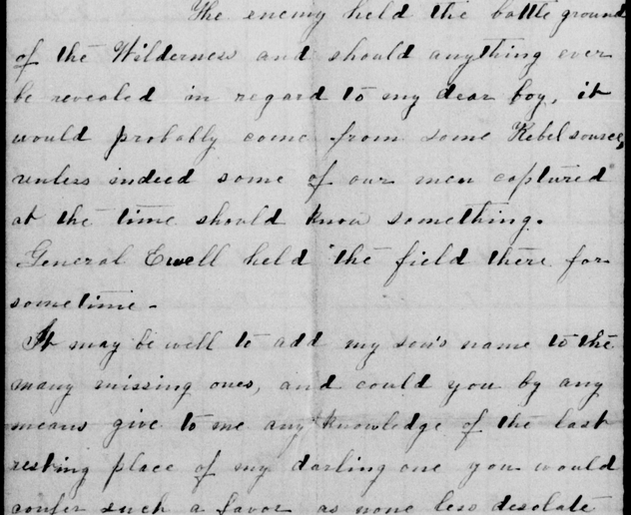 Miss Barton Dear Madam,
I approach you with my great sorrow, but hardly indulge the hope that you can do anything for me. My darling boy, my only son, was reported killed in the Battle of the Wilderness, May 6th, 1864. His body was not found, and the hope was entertained by his Regiment and clutched at by myself, that wounded he had fallen into the hands of the Enemy, a prisoner and not dead.

After various fruitless efforts to obtain information, General Longstreet courteously ordered an examination in the southern prisons, and we obtained a certificate from each that no such name had ever been received. After all our investigations we are led to the conclusion that he died on the battle field, or mortally wounded, was conveyed to some farm house and may have there been buried. He was Captain of company D. Fifth Michigan Infantry. His sword, a cavalry sabre, had his name engraved upon it. Wilber Hurlbut, Fifth Michigan Infantry.

He was in Hancock’s Corps, Birney’s Division, Hay’s Brigade. He had command of the Regiment at the time he fell. Had charged the enemy through a wood and was in the vicinity of Spottsylvania. Our men were heavily pressed and fell back. Captain Hurlbut was missing. A man, by the name of Luke Stanton, told an officer that he saw him fall. We have been unable to find Luke Stanton & have never ascertained to what Regiment he belonged, but learned he was soon after mustered out of the service. Captain Miller, Aid to General Hancock, made such efforts as he could, and other of his comrades did all in their power to learn his fate but we elicit nothing. If he died on the battlefield, I would that I knew it and if he died at a farm house, how much I wish to know it.

For his sword I would give a handsome reward. Anything that was his would be most precious to me and nothing to strangers. Some articles of toilet he had with him have his name. Whatever of money found on his person was of course the spoil of war. My son was twenty-two years old. Wore no moustache or beard. Was about six feet in height. When in College he was rather spare, but the outdoor life of the army had given him a robust appearance. He entered the army as Aid to General Richardson. After that officer’s lamented death, he served in the Michigan Fifth. He had participated in more than twenty battles. Was severely wounded at Gettysburg, but from which he wholly recovered.

The enemy held the battle ground of the Wilderness and should anything ever be revealed in regard to my dear boy, it would probably come from some Rebel source, unless indeed some of our men captured at the time should know something. General Ewell held the field there for sometime. It may be well to add my son’s name to the many missing ones, and could you by any means give to me any knowledge of the last resting place of my darling one you would confer such a favor as none less desolate than myself can appreciate.